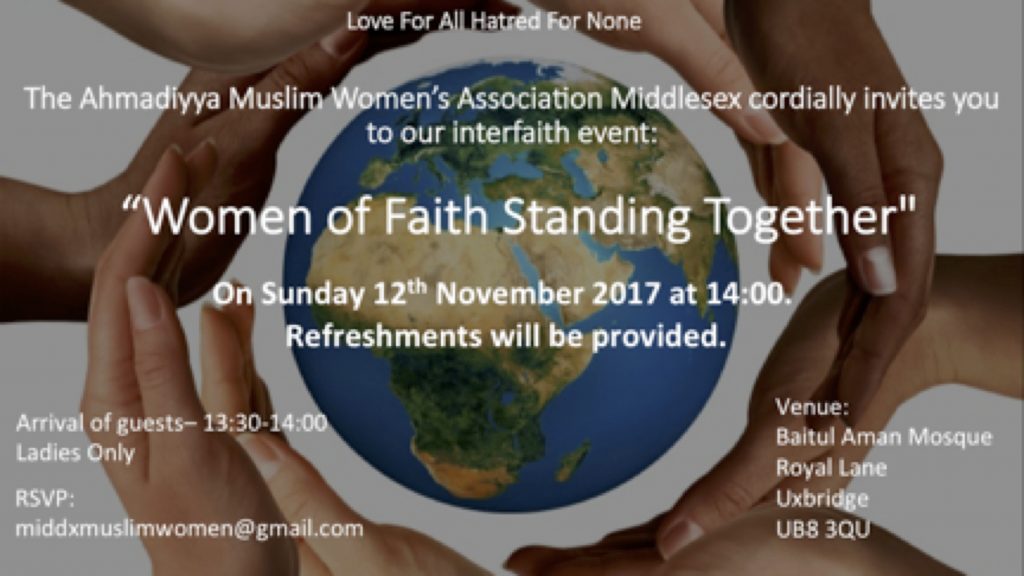 Women of Faith Stand Together
November 12, 2017

Today Abrahamic Reunion Youth Leader Zaynab Manasra and I, Reverend Anna Less PhD, The Abrahamic Reunion’s Executive Director, and Amanda Kenton, the Abrahamic Reunion’s UK Founder and Director, travelled to the Baitan Amul Mosque in Uxbridge, England to be guest presenters at an all-women’s event called ‘Women of Faith Standing Together.’ We, together with Rabbi Naomi Goldman from the Kol Chai Synagogue in Middlesex, England, are the guests of honor.

Rabbi Naomi is the newly appointed Rabbi at Kol Chai Synagogue, the spiritual home for about 300 Reform Jewish families. Reform Judaism is a major Jewish denomination that recognizes the evolving nature of Judaism, and emphasizes Judaism’s ethical aspects rather than its ceremonial ones. Considered to be a liberal strand of Judaism, Reform Judaism was formulated by Rabbi Abraham Geiger and his associates in 19th-century Germany. 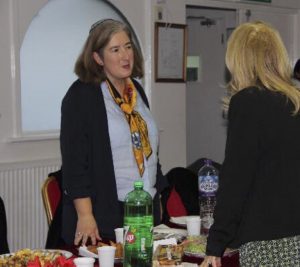 The Ahmadiyya, whose motto is “Love for all. Hatred for none,” regard themselves as a moderate sect of Islam. Persecuted in their native homes of India and Pakistan, they have a large population in England and in the USA. Part of their belief is to understand other religions and to counteract extremism.

Established in the UK since 1913, The Ahmadiyya community built London’s first mosque, The London Mosque in Putney, in 1926. The Ahmadiyya Muslim community now has one hundred branches across Britain, and have opened a number of mosques, including the landmark Baitul Futuh mosque in south London, which holds 10,000 worshippers, and is the largest mosque in western Europe.

One of the 72 sects of Islam the Ahmadiyya are often persecuted for their beliefs by other Muslims primarily because the Ahmadi believe that their founder Mirza Ghulam Ahmad (1835 –1908) is the messiah and successor of the prophet of Muhammad.

Rabbi Naomi presents first, and she reads passages from the Jewish tradition that emphasize Judaism’s commitment to friendship, and support for other religions.

First she tells the Talmudic story that is often attributed to Hillel the Elder (c. 110 BC – 10 AD) in the following teaching Hillel, who is asked by a prospective convert to Judaism, to teach him the whole Torah while he stands on one leg, replies:

“Don’t do unto others what you would not want done to you – that is the whole Torah; the rest is commentary”

Rabbi Naomi also promises Jewish friendship and support for the Muslim community, and reads the following Jewish teaching regarding how Jewish people are required to treat foreigners.

Love foreigners as you love yourselves, because you were foreigners one time in Egypt. I am the Lord your God.”

After Rabbi Naomi’s presentation, I give the Abrahamic Reunion’s Power Point Presentation, which describes how we put the AR’s founding precepts into action through various projects.

After the AR’s presentation, a number of women from the Ahmadiyya community speak, explaining their teachings and ideals

Then there is a question and answer period, and members of the audience who were clearly inspired by the AR’s simple, yet innovative interfaith projects ask many questions about the practicalities of adapting these methods to expand their own interfaith efforts.

They are particularly interested when Zaynab describes a project she participated in that was initiated by the Abrahamic Reunion when she was a young teenager. Zaynab described how in Israel, where she grew up, communities are often isolated by religion, and therefore most schools are home to students of only one religion. In this environment a young Zaynab had developed an attitude that her religion was the “best religion” and the only “true religion.” But then she participated in a three-day Abrahamic Reunion project that brought students from the Muslim, Christian, Jewish and Druze faiths, to live together for three days under the supervision of their teachers. These students spent these three days eating together, sleeping together, and discussing open-ended questions, and participating in activities designed to transform their preconceived attitudes about “the other.”

Zaynab described the project as completely life altering, it was a 3 day experience that forever opened her heart and changed her attitude about other religions.

en years later, Zaynab remains in touch with students from this project; she says now a number of those students have children of their own and as young parents they dream of repeating the project with their own children in a few years.

We tell the members of the Ahmadiyya community, and the Jewish community that if they are interested in becoming trained as an interfaith project developer that the AR is available to mentor them or simply answer questions and offer support.

After watching our slide show and asking questions, women in the audience become inspired, begin to brainstorm and spontaneously discuss innovative interfaith project ideas of their own.

I ride home with Mrs Lubna (Navida) Ahmad, the Regional Secretary for the Ahmadiyya Muslim Women’s Association Middlesex, and it feels like the AR has found a friend in a community dedicated to the same ideals for peace and interfaith.