Last year when we came to England Ghassan and I spoke at a Quaker meeting. One of the attending Quaker ministers there, Yvonne Dixon was so moved by our talk that this year she arranged for David, Ghassan and I to speak at Grendon Prison where she is a chaplain.

Grendon Prison is the United Kingdom’s only therapeutic prison community for the treatment of serious sex offenders and violent criminals.

Below are some excerpts from an article about typical inmates at Grendon Prison that I read to prepare myself for my experience there. The article is about “Adam” and “Eddie (not their real names).”

I wasn’t expecting that, writes Home Affairs Producer Ginny Sandringham. I was prepared for “I killed somebody”, or “I killed another gang member”, or “I killed my best mate because he was sleeping with my wife”, even. But this was something different. For the next few minutes I couldn’t think about anything else. His words echoed round my head as he carried on talking, telling me how much time he’d already served (eight years) and how much of his tariff he still had to serve (seven years).

“It’s what I signed up for. I knew the only way I was going to get through this was to come to Grendon (prison) and try and turn my life around by facing my demons.”

“I’m going to be taking part in psycho-drama soon”, he tells me, “which is where we act out the crime with the other inmates. I’ll have to go over the night I killed my daughter in detail, not only from my perspective but from my wife’s and my daughter’s.”

He looks absolutely terrified at the prospect.

At the end of his trial the judge told Adam: “You will have to live with what you have done for the rest of your life.”

But by coming to Grendon it’s even harder than that. He has to re-live it every day.

“Eddie”, a former gang member from Birmingham, is in for murder.

“All I had ever known was how to be part of a gang”, he said. “It was normal for me to have a gun in my hand. It was normal to be violent. When I got sent to prison my mates were already there.

“Coming here is probably the hardest thing I’ve ever done. (Here) You’re asked to talk about your feelings – something you never do in a gang. You’ve got to accept people who are different, and you have to control your anger. If you’re violent you’re out. It’s the complete opposite of being in a gang.”

This is the story that most of the inmates tell. The decision to come to Grendon is not an easy one.

To us on the outside it seems like a no-brainer: a high security jail surrounded by violent and desperate men or a prison where violence isn’t tolerated, you can wear your own clothes, and take part in therapy? But we haven’t lived the lives they have.

As we drive through the loops of barbed wire to enter the prison grounds, Yvonne explains that the Grendon Prison grounds also house the Spring Hill Prison, which was used during the Second World War as a radio transmission centre for Special Operations Executive . I am stunned to realize that my spiritual teacher’s sister Noor Inayat Kahn, who was trained as a radio operator sent her radio transmissions to these very grounds throughout the war. After the war, theses facilities were converted to become the UK’s first open prison. And in recent years the gymnasium here was dedicated to, and named after Noor Inayat Kahn.

I feel her hand reaching through time and space to guide this experience as we sign in and enter a chamber where we, and our bags are searched. They confiscate my jump drives and my pack of chewing gum.

“Some one could use it to make an impression of a key,” they explain.

We are escorted through hallways hung with excellent and very detailed artwork done by the prisoners with lots of time.

We enter a large and very cold gymnasium to set up for our presentation. We are told that our program is “very popular” and over 65 inmates have signed up to come. More chairs and benches are brought in. The prison therapists, clergy and staff also want to see what we are presenting.

We are introduced to the prison’s Imam and other clergy members.

As people file in and take their places, I can’t keep myself from trying to identify who is the staff and who are the inmates. Many people in the audience wear religious symbols, necklaces or beards that identify their religious affiliations.

David and Ghassan each speak eloquently about the work of the AR. When Ghassan speaks in Arabic and references the Quran and other Islamic texts, the Imam and various audience members light up and nod. When David speaks from the heart people around the room respond with profound recognition and applause.

I show the power point, and explain our activities, and afterwards there is a question and answer session. The questions are deep and heartfelt, and are followed by refreshments and an opportunity for the audience to speak with us individually.

A young Muslim inmate filled with light introduces him self. He tells us our work of bringing people from insular religious communities to meet with others was so important. He describes how growing up in an insular Muslim community in London had led to his radicalization and ultimately to this destiny.

We were told that in the after math of nine eleven he had murdered someone in retaliation for the media’s portrayal of Muslims, and he has been in prison since that time. I try to feel back through the years to nine eleven and consider what I had experienced in my own life since then and I try to imagine what he had experienced….

He said that in about 5 years perhaps he would released and it was his dream to be able to work with an organization like ours to promote interfaith harmony.

Another man approaching middle age with a long beard introduced himself as having an English, Jewish Mother, and a Muslim, Pakistani father. He shared had been in prison since the age of 17. He didn’t expect to be out soon. He wondered if he could work for the Abrahamic Reunion from within the prison. He said he had good computer skills and this work was exactly what he had been looking to do. He wondered if there was a way he could be of use to us, and to our work.

Others who had been involved in religiously motivated hate crimes came forward to express their support and admiration and share how important they felt our work was.

Chaplains came forward to ask how they and the inmates could learn to start an AR inspired interfaith study program.

As we rode the train home each of us described how profoundly and deeply moved we were by our experience there. We shared that it could potentially be a life altering experience for each of us personally and perhaps for the Abrahamic Reunion in general. We joked about presenting to a “captive audience” but our joking was an attempt to alleviate the profound sense of responsibility that each of us was experiencing as we continued to imagine how the Abrahamic Reunion could serve this community, and as we recognized the potentially far-reaching effects that work could have.

When I arrived home and opened my computer I had inquiries waiting from the directors and chaplains at the prison explaining that ‘radicalization’ in prisons is a very important topic that needs to be addressed and wondering how we could work together in the future.

We are absorbing this.

Blog London 5/22/17 After the Manchester Bombing 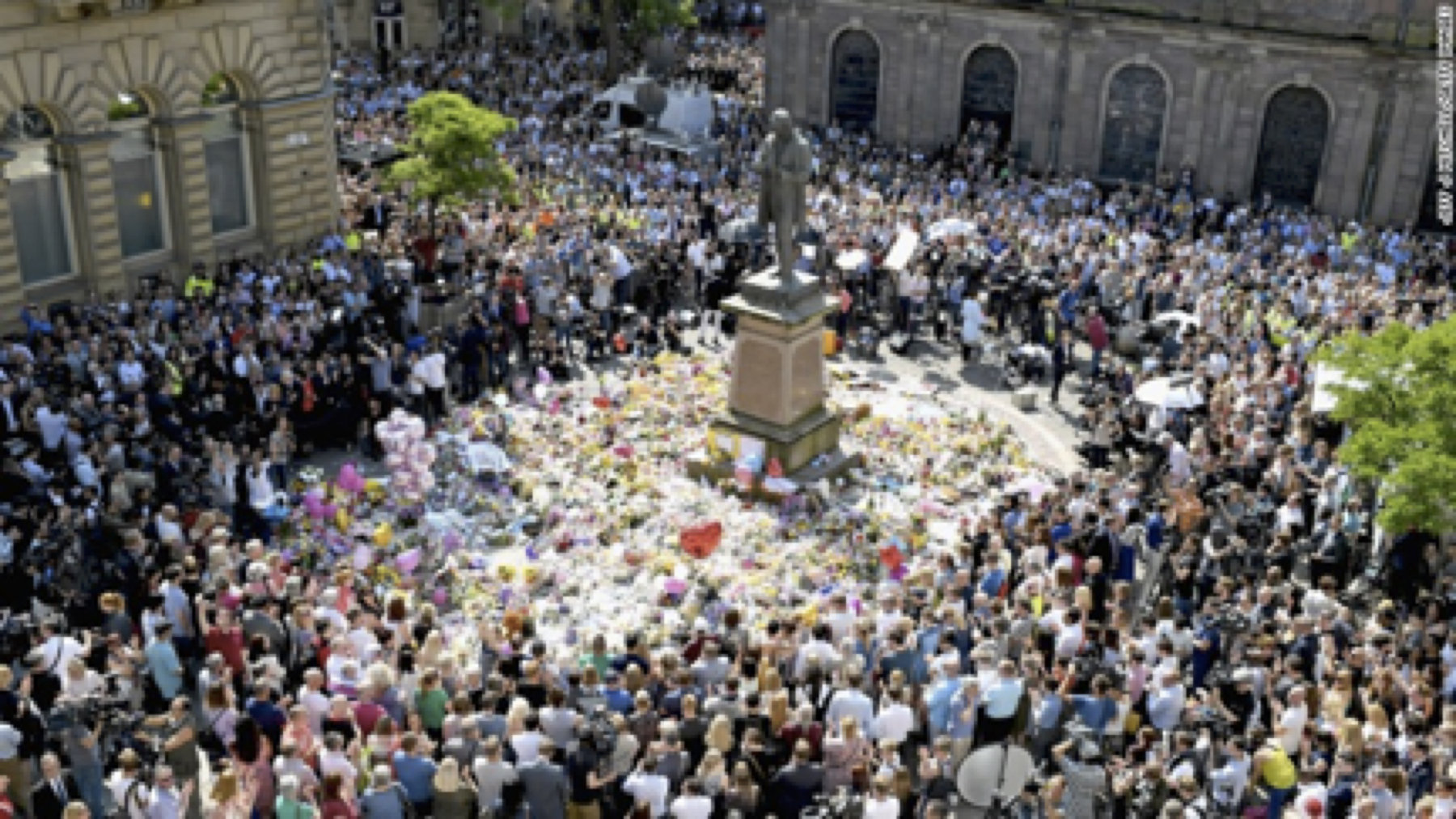 It is May 22 and the horrifying news comes in from Manchester.

There has been a suicide bombing at an Ariana Grande concert attended by mostly young teenage girls and their families.

Police release pictures from a security camera of Salman Abedi the 22 year old suicide bomber sauntering into the concert in his £150 Nike trainers and trendy jacket on the night of the attack. A short time later Abedi killed 22 people and injured 119 when he detonated a bomb after the concert.

A few days have passed and the terror threat has been downgraded to severe and police say the investigation is ‘making good progress’ as they appeal for more information from the public.

We stay in Sheperd’s Bush, a diverse, but predominately Muslim neighborhood. It has many Muslim restaurants, Arabic writing on the shop signs, and a Mosque within walking distance of our apartment. It is common to see women in full niqab and men in kaftans shopping in the markets.

They have different theories, “Perhaps he wanted to kill himself, but he did not want to die alone”, “Perhaps someone planned it who is against Muslims” “People are under so much stress they are just crazy”

It is clear the Muslims we talk to are as baffled as we are, and even more frightened. Some of them are so afraid they do not even want to talk about it. They also do not regard themselves as safe.

We ask the ones who have teenagers what the mosques are doing to protect them and to teach them.

Ghassan admits that he was worried about going to the mosque for Jummah prayers after the attack. He doesn’t know what to expect. His history of attacks from radicals makes these events come even closer.

He decides not to go to our local neighborhood mosque, but instead goes to the large Central Mosque.

When we meet up with Ghassan in a coffee shop later, we sit and talk over coffee and lemonade, and he is palpably relieved after going to the mosque. He said that when he first entered the mosque a number of the congregants were dressed as strict orthodox Salafis, which generally indicates they uphold a very fundamentalist interpretation of Islam, but after the prayers, when the Imam spoke, Ghassan came to understand that the Imam was advocating a very moderate perspective. The Imam told the congregation that they are members of the UK society and need to protect their home and their fellow countrymen and come forward if they knew any thing. He explained that the people who are most damaged by these types of acts are the Muslim community itself and he prepared them to enter the sacred month of Ramadan, which is a time of deep inner reflection for all Muslims.

After we talk we prepare to enter the train for our next meeting. It is rush hour and I realize I feel nervous about getting on the train, there is no security or metal scanners, features that I have come to expect in public places in much of the world, and as we squeeze on board our bodies are pressed against our fellow passengers. My heart begins to pound as I anxiously scan people with backpacks and look into the faces of young men, as the train carrying thousands of passengers zooms beneath metropolitan London, I wonder why choose a venue with young teenage girls as a target. Why? I close my eyes and pray for those children and their families and I remember words of the Sura al Fatiha and send it out as a prayer to all.