We pile into the car in Nazareth, Israel and head across the border for Jericho, to participate in a multifaith text study group organized by the Abrahamic Reunion’s Palestinian Director, Mohamad Jamous.

Abed, the Abrahamic Reunion’s Israeli Project Manager is driving; Ghassan, the Abrahamic Reunion’s International Director, is at his side. I am sitting in the back with Abed’s wife Su Su and their young baby. As we make the two-hour drive, we pass groves of Medjool date trees. Mesh bags protect massive bunches of the nearly ripe dates growing on row after row of towering, perfectly matched trees. Ghassan explains that Israel is the producer of some of the best quality dates in the world. 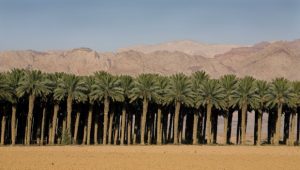 Grown on annexed Palestinian land in the West Bank, Israel is one of the biggest exporters of dates to the wealthy Gulf States.  On the other side of the road, opposite the Israeli groves, are the struggling Palestinian date groves. The fruit on the stunted and mismatched trees is uncovered, and many of the trees seem barren.  Ghassan winces at the contrast and explains that the Palestinians lack the resources and infrastructure to produce dates for export.  He says their dates will be sold in local markets for a fraction of the price.

Abed and I traveled this same road just two months ago when we headed to Jericho to celebrate the Abrahamic Reunion’s multi-faith Iftar event.  As we drive along today we see a number of new building sights being leveled for the construction of Israeli settlements.

Abed explains, “A lot has changed since our last trip together to Jericho. Since the new law has passed, our work has become much harder as fear, tension and frustration among the Arabs has grown. “

Abed is referring to the new “Basic Law” passed by the Israeli Knesset in July.  It is Israel’s 14th “Basic Law”, which for the first time in Israel’s 70 year history, enshrines Israel as “the national homeland of the Jewish people.”

Although 20% of Israeli citizens are Arab, the new legislation makes no reference to equality for all Israeli citizens like the one made in Israel’s Declaration of Independence — which pledged that the state of Israel would “ensure complete equality of social and political rights to all its inhabitants irrespective of religion, race or sex.” A full translation of the new law can be read here.

Finally, we arrive at the restaurant where our meeting will be held. I recognize several of the priests and Imams who have lined up in front of the restaurant to shake hands and greet the participants as they arrive. 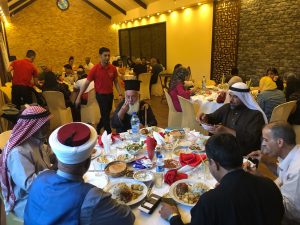 I am not sure what to expect when we enter the private room where the Abrahamic Reunion is hosting its text study session, but I am delighted to realize that 40 people have come, and surprisingly this time Christian participants outnumber the Muslim participants. It is a big achievement for our event organizer, Abrahamic Reunion Palestinian Director, Mohamad Jamous.

Because it is easier for Christians to immigrate to the West, many have left the region and now less than 2 % of the Palestinians in the West Bank are Christians.  Mohamad Jamous had to really reach beyond his familiarity with his own Muslim community to cultivate these relationships.

One by one the presenters and religious leaders introduce themselves and begin to speak. These speakers are:

They each speak with a loving depth that cuts through the current political atmosphere and causes people to re-experience and affirm their core human values of love for one another.

The eminent Sheikh Mohammed A-Saeed Salah is the Mufti of the Palestinian National Security Forces. A Mufti is a Muslim legal expert empowered to give rulings on religious matters. After welcoming everyone, he thanks me as the sole American participant for the financial support that Americans have given to enable this multi-faith event to happen.  In a world where Palestinians feel unseen and unheard, coming together and experiencing being seen by each other is particularly life affirming and eases their sense of isolation.

Ghassan translates the Mufti’s talk for me:

He goes on to share many stories of Muslim and Christian co-existence and cooperation in Palestine.

He also tells a personal story about how a Christian boy in his neighborhood started a fight with his daughter over their religious differences. He describes how the fight escalated to include more young relatives and neighbors until more and more people in the neighborhood were becoming involved. Then he explained that the mother of the Christian boy, because she trusted the spiritual wisdom of the Mufti, and trusted him to be a fair mediator, ultimately sent her son to the Mufti to resolve the issue. The Mufti described how he brought together the neighboring Christian and Muslim youth, who had been fighting with one another, and told them:

Never say “because I am a Muslim,” or “because you are a Christian.” You must say instead, “because we are Palestinians… “ Do this and it will be the last time you will have a problem between you, because long ago we used to live together peacefully.

The topic of today’s text study is the “Holiness of Life.” 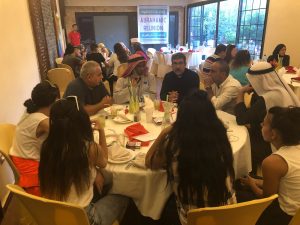 After reading the texts aloud, the Christian and Muslim clergy join tables of participants who have broken into multi-faith groups to discuss the texts more deeply. The clergy each sit at the different tables to answer questions and serve as references. People introduce themselves. A Palestinian man from Bethlehem tells me he has lived in Canada for the last 18 years, but he has moved back to Bethlehem to take care of his ailing mother.  He has become very involved with the youth at his Baptist church and explains that their congregation helps support their Muslim neighbors so they can participate in the Hajj. He says that because Palestinians have no airport, it is not easy for the Muslims to pass through all of the check points to leave the country so they can go to Saudi Arabia on Hajj. So the Christians in their congregation volunteer to drive their Muslim neighbors through the check points to Jordan and Iraq and even to Syria, so that they can board planes to Saudi Arabia.  The Christian drivers bring the youth from their churches with them so they can talk to their Muslim passengers and learn about Islam. They feel it is their duty as Christians to support their Muslim neighbors, and also to teach their own youth to be accepting of people who believe in their same God, but who worship that God in a different way.

The Muslim woman next me introduces me to her Christian companion and says they are best friends, and explains she has heard about this text study program from her Christian friend.

It is amazing to hear both Christians and Muslims using Arabic to discuss their texts.  Arabic is a language that most Westerners associate only with Islam, so hearing Christians using phrases like “Allah Ho Akbar” and “Alhamdulillah” shatters many cultural stereotypes and causes one to experience the message of God liberated from culture, and religion, and even from language.

On the break between the text study program and the shared meal, Father Firas, the Melkite Catholic priest who often participates in Abrahamic Reunion events, tells me he travels around the world speaking to different congregations about the Palestinian people. He hopes to dispel the erroneous perception that Palestinians are violent religious fanatics, and he tries to let the world see that they are loving people who have the capacity to love all people, including their Jewish neighbors. I ask him if he speaks to Jewish congregations, and if they are open to his message. He says, “No, so far the organizers of my speaking tours in various Western countries have not thought that would work out.” But he says he is hopeful that some day he will have an opportunity to visit a synagogue and speak there.  I admired this man and his commitment to the path of love.