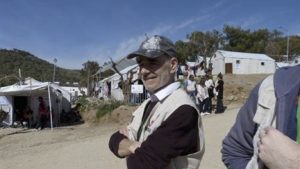 Rabbi Jonathon Wittenberg is Masorti Judaism’s senior rabbi in the UK. He is also the Rabbi of the New North London Synagogue, which has approximately 2400 members. Besides being a leading writer and thinker on Judaism, he is also a board member of the Elijah Interfaith Institute, an organisation that partners with the Abrahamic Reunion and Tantur Institute, to co-sponsor “Praying Together In Jerusalem”, a monthly event whose participants believe in the power of side-by-side prayer to bring friendship, respect and, ultimately, peace between people of all faiths. These gatherings have been held at various venues within, and outside the walls of the Old City of Jerusalem since 2015. They are currently held on the last Thursday of every month, at sunset, at the Jaffa Gate.

Rabbi Wittenberg and his congregation together with a few other congregations have collectively taken on the responsibility of supporting a community of Syrian Refugees in their North London district of Finchley, and it was at his home, last spring that the Abrahamic Reunion was invited to co-host an interfaith Iftar for those refugees, and the congregations that support them. To this day we have still maintained a close relationship with the Syrian families we met there.

The depth of Jonathon Wittenberg’s commitment to these refugee families and to interfaith can best be described in his own blog, which begins like this:

Refugees from Nazi Germany, new to London, twice bombed out in 1940, my mother and her family were taken in by a devout Christian couple, the Micklems. These good people welcomed them into their home in Boxmoor, where they stayed until the end of the war.

When they were leaving, my mother said to Mrs Micklem:
How can I ever thank you enough?
She answered:
One day you’ll help others who are refugees as you once were. That’s how you’ll thank us.

This time we have been invited to Rabbi Wittenberg’s home to help him commemorate, together with members of his large congregation, the event described in Genesis of when Isaac and Ishmael come together to bury their father, Abraham.

Then Abraham breathed his last and died at a good old age, an old man and full of years; and he was gathered to his people. His sons Isaac and Ishmael buried him in the cave of Machpelah near Mamre, in the field of Ephron, son of Zohar the Hittite, in the field Abraham had bought from the Hittites. There Abraham was buried with his wife Sarah.
Genesis 25:8-10

The story is profound in its simplicity: Isaac and Ishmael, half-brothers who earlier did not get along, come together in peace to bury their father. It’s an amazing story of forgiveness that I think still says a lot to us today.

We meet many influential members of the Jewish community in Rabbi Wittenberg’s home. Most of them hail from all over the world, and have fascinating backgrounds. 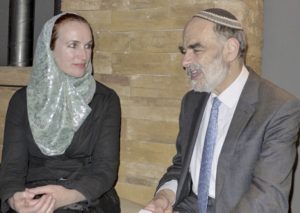 One older woman, Judith, explains that her family came from Aleppo, Syria but she was born and raised in Jerusalem and although she is Jewish, her first language was Arabic, “because at that time almost all of the Jews in my generation who lived in Jerusalem spoke Arabic as their first language.”

I was also surprised to learn that Judith’s brothers and sisters had Arabic names rather than Jewish names. “It didn’t used to be like it is now,” she says, “in those days we all lived together, we spoke Arabic, we were neighbours, and we were friends.”

I am in awe of this woman, who although she is 88 years old, is still a practicing psychotherapist who travels to the West Bank and Israel regularly to train and mentor psychotherapists there. She founded, and is the chair of an organization in the UK called the “Friends of the Bereaved Families’ Forum”, a group that supports 600 Israeli and Palestinian families who have lost close relatives to inter-communal violence, and are determined to spare others what they have suffered.

The next day, for Interfaith Week, Judith will be speaking to the congregation of a large mosque in London to represent the Jewish community, and the perspective of the “Friends of the Bereaved Families’ Forum.”

We were also happy to meet Liron Velleman again. Liron is the Campaign Manager for the Union of Jewish Students (UJS), which represents 85,000 Jewish students on campuses across the UK and Ireland.  Last year we met Liron at an Abrahamic Reunion event he helped to organise for students, at JW3, the Jewish Cultural Centre in London.

Another gentleman seeks us out, and takes our card and says he is anxious to connect, because he was the psychotherapist who trained the therapists at Grendon Prison, where he knows The Abrahamic Reunion has been working. He wants to support our prison work and we are eager to follow up.

Other important connections are made, and since that evening a number of participants, who took our cards, have reached out to connect.

Thank you Rabbi Wittenberg for supporting our work. We look forward to being together again soon.