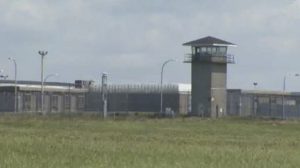 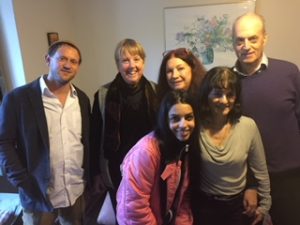 No photos were allowed in the prison, however this photo was taken beforehand of everyone going (minus Sheikh Ghassan who is taking this picture.)

Yvonne introduced us to the audience and spoke about Springhill’s history, which served as the training centre for British Special Forces during World War II. She explained that the gymnasium where we were giving our presentation was built by the prisoners and named after Britain’s first Muslim war heroine, Noor-un-Nisa Inayat Khan.

Although Springhill Prison shares the same grounds as Grendon Prison, where the Abrahamic Reunion had presented last year, Springhill has a very different population from that of Grendon Prison, which offers a therapeutic program for England’s most dangerous and violent criminals.

Springhill is an open prison that supports the needs of about 335 long-term prisoners who are in the last few years of their sentence. At Springhill, prisoners train and prepare for their release, and participate in a resettlement program that allows them to work in jobs outside of the prison during daylight hours, and return to live in the prison when they are not working.

The majority of residents in our audience were Muslims and surprisingly for us, there were a number of Palestinians. 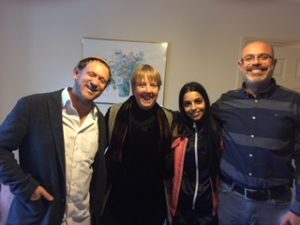 The Muslim inmates eagerly gathered around Ghassan to speak with him in urgent, hushed Arabic while Mordechai and I made our presentations.

After all of us had spoken there was a Question and Answer period, and initially the tone of the inmate’s “questions”, which were directed at Mordechai, began as wounded and sceptical challenges that bordered on being aggressive.

But Ghassan immediately stepped in to skilfully navigate their hostility, and soothe them with quotes from the Quran and the Hadith.

He appealed to their innate desire for peace in ways that were culturally familiar for them, and once they felt their pain had been heard and responded to, they began to soften and calm down.

As Ghassan continued to raise their consciousness to a higher level, they gradually began to open their hearts to Mordechai (their preconceived enemy) and our other speakers, and an atmosphere of trust, hope and camaraderie began to take over. 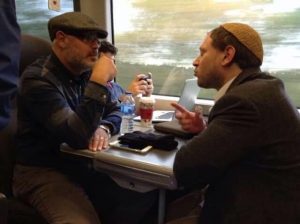 what you believe?” In other words, “Is it really safe, and possible, to love one another?” As they hugged Ghassan and Mordechai goodbye, and shook my hand, they admitted what “a good guy” Mordechai was, and they shared that they had never met people like us, and this evening offered them the possibility to consider a new ending to an old story that always left them feeling like the victim.  They asked how they could get in touch with us when they “get out.”

The authorities and staff at Springhill also immediately came forward at the end of the program to discuss our next steps together regarding offering programs, and in-depth trainings, here, and in other prisons they are responsible for.

As we packed our things to leave, we could finally exhale and thank the dedicated staff at Springhill.  We send a special thanks to Chaplain Co-ordinator Brenda Davies and Yvonne Dixon for their support of the Abrahamic Reunion.