Blogs From the May 2018 UK Peacemaking Tour 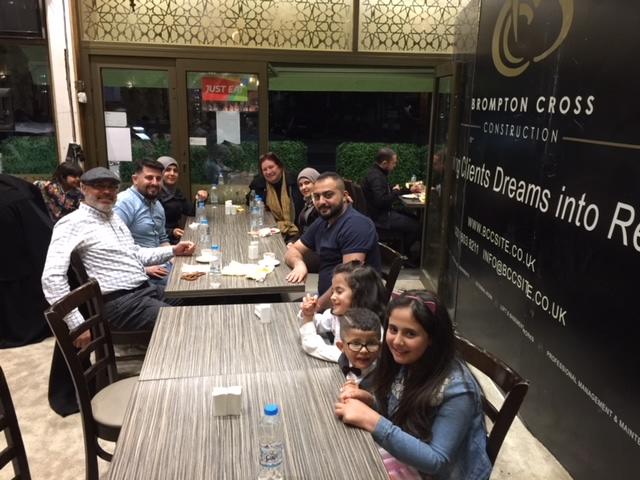 Tonight Ghassan and I have invited A’laa and his family to celebrate Iftar with us.

For those of you who have read my blogs in the past you will know that two years ago when Ghassan, and I first came to England for an Abrahamic Reunion tour, we gave a presentation at the New North London Synagogue and afterwards Rabbi Wittenberg (who is the head Rabbi there) invited us to his home for an interfaith Iftar celebration he was offering for members of his congregation and the Syrian Refugee community that had newly settled in their neighborhood in North London.

Rabbi Wittenberg was anxious for Ghassan and I to attend so Ghassan could help translate for the Syrian refugees. At that Iftar Ghassan and I made a connection with a young Syrian father named A’laa, who expressed a desire to start an Abrahamic Reunion text study group. A’laa saw Abrahamic Reunion text study sessions as a perfect way to help his family practice their English, learn about the new culture they had found themselves thrown into, and also help his new English, Jewish neighbors, and his multi faith class mates at college get to know one another more deeply.

However, before A’laa could start his text study group, tragedy struck, and he contracted intestinal cancer.

Ghassan and I continued to visit A’laa and his family. During our visits A’laa’s wife explained how grateful she was for the opportunity to practice her English with us. It is a skill she desperately needs to develop so she can support her young family in this new land. 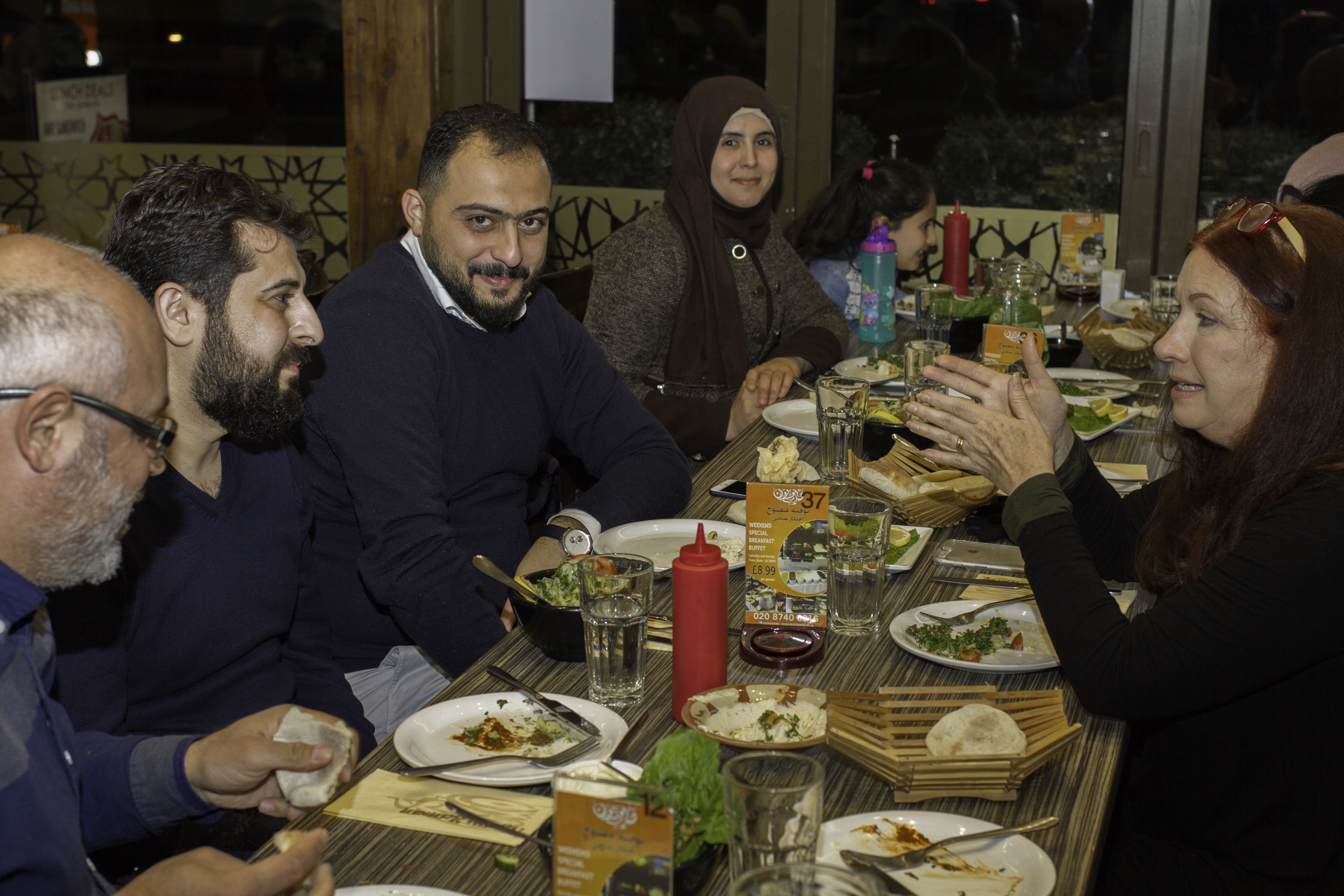 On our last visit Ghassan and I introduced A’laa and his family to Judith, an elderly Jewish woman we had met at a dinner party for the Abrahamic Reunion here in London. Judith had grown up in Jerusalem prior to 1948, when Israel became a state. Although Judith was Jewish, like her other Jewish neighbors in Jerusalem at that time, she grew up speaking Arabic and most of her siblings had Arabic names. As a child she played freely with her Muslim and Christian, Palestinian neighbors in the streets of Jerusalem. But as a young woman Judith married and moved to England. She became involved with her synagogue here, and her Arabic faded. She also became a psychotherapist, specializing in healing childhood trauma, and she began making trips to the Holy Land to help families who had lost family members to the conflict there. Judith had recently retired from this work, and was looking for something. When I met Judith and told her about the work we were doing for the Abrahamic Reunion in the Holy Land, she wistfully expressed that she wished she could remember how to speak Arabic.

It seemed like a perfect idea to introduce her to A’laa and his family, so during our last visit to London in November 2017, Ghassan and I brought Judith to A’laa’s home and introduced her to him and his wife, Tahgrid and their daughter, and to A’laa’s brother Bahaa and his wife Raada (who also happens to be Tahgrid’s sister) and their two children. Since then Judith has visited A’laa’s family almost weekly, and on each visit they spend an hour speaking English, and an hour speaking Arabic.

I am delighted when we meet A’laa’s family at the restaurant and the women are able to converse with me in English as a result. I tell them that I had tried to call Judith to invite her as well, and I am shocked when they tell me that Judith’s own daughter recently died unexpectedly of cancer only 3 weeks after being diagnosed. They say they have been helping her, but that she often doesn’t see her phone messages, and they will let her know that I had tried to invite her.

We learn that A’laa’s cancer treatments have been successful, and as of a few weeks ago he has been able to discontinue chemotherapy. He will go back for a check up in six months to be evaluated to see if he will need any follow up treatment.

In the meantime A’laa is going to college, but he has decided to switch majors, and study media so he can become a film editor. He says now that he has had cancer, he will no longer to be able to stand on his feet all day as a pharmacist as he did in Syria and Jordon. But he assures us that he loves his new career choice, and is doing well in school.

The children are also doing well in school and speak English fluently. If one did not know their background one would think they were born here and grew up speaking English as their mother tongue. Bahaa has been able to get a part time job as a bookkeeper, and he continues to go to school to earn a Master’s degree in English accounting so he can return to his former profession in his new country. Tagrid and Radaa are excellent cooks and get some catering work from people in their new community. They are settling in, and they see the possibility of being able to work full time in a few years.

They invite us to their home for an Iftar on Friday night and say they will also invite Judith. The adults say that as they adjust to life in England they have been able to remain in touch with their families who still live in Damascus, which is still relatively safe. Although they have been unable to start a text study program for the Abrahamic Reunion, we feel that we have been able to help them and Judith form a cross faith support system that has served them both. And we hold this family dear to our hearts.